Osho ~ Books I Have Loved 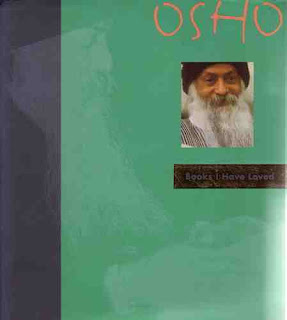 The guest, the host, the white chrysanthemum... these are the moments, the white roses, when no
one should speak.

But silence speaks in its own way, sings its own song of joy, of peace, of beauty and blessings;
otherwise there would not have been a TAO TE CHING, nor would there have been a SERMON ON
THE MOUNT. I consider these to be the real poetries although they are not compiled in any poetic
way. They are outsiders. They are kept out. This is true in a way: they don’t belong to the norm, to
the standard, they don’t belong to any measurements; they are beyond all of them, hence they are
brushed over.

It is said that Zarathustra laughed when he was born. It is very difficult to imagine a new-born baby
laughing. Okay, smiling – but laughing? One wonders at what, because laughter needs a context.
At what joke was the baby Zarathustra laughing? The cosmic joke, at the joke this whole existence
is.

Yes, write in your notes the cosmic joke and underline it. That’s good. I can even hear you underline
it. That’s beautiful. Do you see how good my hearing is? When I want to I can hear even the sound
of drawing a sketch, a leaf. When I want to see I can see in darkness, utter darkness. But when I
don’t want to hear, I pretend not to hear, just to give you the good feeling that everything is going
good.

Zarathustra at his birth, laughing! And that was only a beginning. He laughed throughout his whole
life. His whole life was a laughter. Even so people have forgotten him. The English have even
changed his name, they called him ’Zoroaster’. What a monstrosity! ’Zarathustra’ has the softness of
a rose petal, and ’Zoroaster’ sounds like a huge mechanical disaster. Zarathustra must be laughing
at his name being changed to Zoroaster. But before Friedrich Nietzsche, he was forgotten. He was
bound to be.

The Mohammedans had forced all the followers of Zarathustra to become Mohammedans. Only a
few, very few, escaped – to India, where else. India was the place where everybody could enter
without a passport or visa, without any trouble. Only very few followers of Zarathustra escaped the
Mohammedan murderers. There are not many in India, only one hundred thousand. Now, who
bothers about a religion of only one hundred thousand – who not only almost all live just in India, but
in and around only one city, Bombay. Even they themselves have forgotten Zarathustra. They have
compromised with the Hindus with whom they have to live. They escaped the well and fell into the
ditch – a deeper ditch! On one side the well, the other side the ditch. And through the middle goes
The Way – Buddha calls it the middle way – exactly in the middle, just like a tightrope walker.

Nietzsche’s great service was in bringing Zarathustra back to the modern world. His great disservice
was Adolf Hitler. He did both. Of course he was not responsible for Adolf Hitler. It was Hitler’s own
misunderstanding of Nietzsche’s idea of ’superman’. What could Nietzsche do about it? If you
misunderstand me, what can I do about it? Misunderstanding is always your freedom. Adolf Hitler
was a juvenile mediocrity, a retarded child, really ugly. Just remember his face – that small mustache,
those fearful eyes staring as though trying to make you fearful, and the tense forehead. He was so
tense that he could not even be friendly to anybody throughout his whole life. To be a friend one
needs to be a little relaxed.

Hitler could not love, although he tried in his dictatorial way. He tried, as many husbands do
unfortunately, to dictate, to order, to maneuver and manipulate women – but he was unable to
love. Love needs intelligence. He would not even allow his own girlfriend to be alone with him in his
room at night. Such fear! He was afraid that while he was asleep... one never knows, the girlfriend
may be a girl-foe; she may be an agent working for the enemy. He slept alone all his life.

How could a man like Adolf Hitler love? He had no sympathy, no feeling, he had no heart, no
feminine side to him. He had killed the woman within himself so how could he love the woman
outside? To love the outer woman you have to nourish the woman within, because only that which
is within is expressed in your actions.

I have heard that Hitler shot one of his girlfriends for just a small reason; he killed her because he
had said she should not go to visit her mother, but when he was out she went, although she was
back before Hitler returned. He came to know through the guards that she had gone out. That was
enough to finish the love – not only the love, but the woman too! He shot her saying, ”If you disobey
me, then you are my enemy.”

I love the book THUS SPAKE ZARATHUSTRA. I love very few books; I can count them on my
fingers....

THUS SPAKE ZARATHUSTRA will be the first on my list.

THE BROTHERS KARAMAZOV is the second.

Third is THE BOOK OF MIRDAD.

The fifth book is TAO TE CHING by Lao Tzu.

The sixth is THE PARABLES OF CHUANG TZU. He was the most lovable man, and this is the most
lovable book.

Eighth... is my numbering right? That’s good. Then you can feel that I am still in my insanity.
The eighth, BHAGAVADGITA – the divine song of Krishna. By the way ’Christ’ is only a
mispronunciation of ’Krishna’ just as ’Zoroaster’ is of ’Zarathustra’. ’Krishna’ means the highest
state of consciousness, and the song of Krishna, the BHAGAVADGITA, reaches to the ultimate
heights of being.

Ninth, GITANJALI. It means ’an offering of songs’. It is the work of Rabindranath Tagore, for which
he got the Nobel prize.

And the tenth is the songs of Milarepa – THE ONE THOUSAND SONGS OF MILAREPA – that’s
how it is called in Tibetan.

nor the white chrysanthemum.

Ahhh!... so beautiful... the white chrysanthemum. Aahhh, so beautiful. Words are so poor. I cannot
describe what is being brought to me.

Good. Because of this beauty, my ears are incapable of even hearing the noise, my eyes are filling
with tears.

Tears are the only words the unknown can speak,

the language of silence.
Posted by Dhyan Gagan at 10:23 PM