Beloved Osho, Is it really true that God is also searching for me? Can I wait for him to find me? 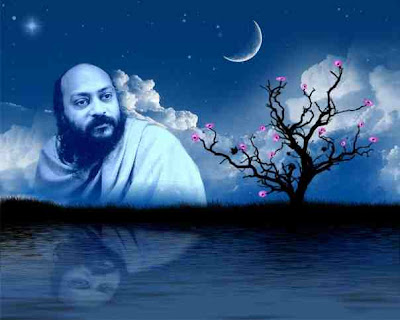 Question – Beloved Osho, Is it really true that God is also searching for me? Can I wait for him to find me?

Osho – Sat Vijaya, it is absolutely true that just as you are seeking God or truth or the beloved, he is also seeking you. The search is never one-sided. And any search that is one-sided is never going to be fulfilled. But your question is, “Can I wait for him to find me?” — then he will also wait to search for you.

Search has to be from both sides; otherwise both sides will be waiting. Existence has a balance about everything. Your waiting is not enough; your longing, your search is categorically needed.
One of the Sufis’ sayings is: if you take one step towards God, he takes one thousand steps towards you. But at least one step on your side is absolutely necessary. And your one step is far more important than the one thousand steps of God, because by “God” is not meant any person; by God is meant the intelligence of this whole universe, the consciousness of the whole universe.

You have a very small proportion of consciousness. Your one step is far bigger than the one thousand steps of God, because existence has infinite intelligence. So waiting alone won’t do. Just waiting is a state which is not alive; there has to be tremendous longing, a thirst from every pore of your being. Unless God becomes a question of your life and death, the meeting is not possible.

Almost everybody will be prepared to wait — that means on your laundry list, God is the last item, when you have done everything of the world. And that is not possible, even in eternity; something or other will be left undone. God has to be your first priority. It has to become a kind of haunting in your heart. Breathing in, breathing out, there has to be a rememberance: whatever you are doing is nonessential, and the essential part is to go deep down in meditation.

Never think of God as someone outside you. That is a wrong beginning — because where will you search for him? The outside is so vast; you don’t have the address or the phone number. In the infinity of existence, in which direction will you search for him? How will you find that you are on the right path? Millions of paths… how are you going to choose? What will be the criterion?

Because of this misconception that God is outside, religions became organized around priesthood, around a holy book, around certain dogmas — because that at least gives you some feel for where you have to search: you have to go to the church, you have to do a certain prayer, you have to go to the synagogue, you have to find your path in the holy scriptures. The idea of God outside has led the whole of humanity into tremendous confusion.

He is within you. Better will be if I say: He is your within, your very interiority, your very center of being. You are on the periphery of your individuality. Move inwards.

First you will meet the thoughts. Don’t get involved in them, just ignore…. Buddha has used the word upeksha, ignoring, as a certain guaranteed method; otherwise you are going to get caught in the net of thoughts. Don’t fight, just go on your way as if mind is empty. And if you can ignore the mind it becomes empty.

The more attention you pay to the mind, the more nourishment you give to the thoughts. If you can pass the boundary of the mind without disturbing — and it is not an arduous thing, just a little knack of ignoring — then you will come into the world of feelings, emotions, moods, which are more subtle than the thoughts. You have entered from the mind and its territory into a deeper area of your being, the heart.

Those one thousand steps are symbolic. He comes towards you as light, as the very essence of beauty, as blissfulness, as silence, as peace. And he comes with so much force, almost like a flood, that you are drowned in it.

You will find God, but you will have to lose yourself; that is the price. It is not much. How much do you think your cost-price is? In fact, any animal in the world is more costly than man. When man dies, nobody is ready to purchase him. When an elephant dies, then thousands of rupees…. When any animal dies, even the dead animal has some utility. It is only man who dies, and all that you can do is either burn him or bury him — just to get rid of him. Rather than bringing some money to you after death he withdraws ome money from your pocket.

So there is no need to be afraid if you are lost, drowned, because in the temple of God only one can exist — either you or he. Duality is not possible there, because duality is conflict. And the experience of God is that of immense harmony. That harmony can be achieved only if you allow yourself to be drowned in the flood that comes from all sides — of joy, of bliss, of ecstasy. The feel of dying in the flood of God is the most exquisite and the most sweet experience — the last, the highest, the greatest; there is nothing beyond it.

But it is not going to happen by just waiting. You will have to go inside your own being. He is present there always; he is your life, he is your all. You are just a small ray of light from that immense source. So when you get drowned in him, it is just that the ray has returned back to the sun. One has come home.
If God is understood the way I am telling you…. And I am not a thinker; it is not my hypothesis, it is my experience. I have passed through that death and I have found that it appears to be death from one side, but from the other side it is resurrection. You disappear as a small creature and become a vast creativity. You don’t lose anything and you gain everything.

But the organized religions don’t want you to be aware of this fact, because their whole business depends on an outside God. Then the priest is needed, the temple is needed, the mosque is needed, the church is needed; then the HOLY BIBLE is needed, then some interpreters are needed, and then all the millions of priests around the world become your mediators with a fictitious God somewhere in the sky.

The Vatican pope has declared it a sin to confess directly to God; you have to confess to the priest. And of course it has to be a catholic priest — only he is authorized to have a direct communication with God. You cannot pray directly, you cannot ask forgiveness directly.

Do you see the cunningness, the meanness, the whole strategy of exploitation? The priest becomes more important than God himself. On the one hand these people go on calling you children of God, and on the other, children cannot directly communicate with their father; a priest is needed as a mediator. The reality is, there is no God outside; it is the invention of the priest. And he has invented a great business. For centuries he has been exploiting men, whether they are Hindus or Mohammedans or Christians or Jews — it does not matter.

There is only one thing every religion insists: that a direct relationship with God is not possible. They don’t give any reasons why. I have seen trees praying directly to God; the rivers and the mountains and the stars don’t have any priests, the flowers and the birds don’t have any priests. Do you think this whole existence except man is not related to God? It is more related to God than man. It is only man who has gone astray.

Have you ever heard in any religion, in any country, a story that God expelled a few trees out of the garden of Eden? Or a few animals, or a few birds? It is only man who is expelled. The story is significant. It simply means that the whole of existence is rooted in God. Only because man has a thinking mind, he has wandered far away. Mind is capable of wandering anywhere — you can be sitting here and your mind may be wandering somewhere in America or somewhere in Germany, or somewhere in Japan, or maybe on the moon…. There are all kinds of lunatics.

It is very rarely that you are here, very rare to be in the place where you are. Your mind is always wandering somewhere else. It is never here, it is never now. This wandering mind has taken you away from your own inner being. And this has become a great opportunity for exploitation. All over the world, like mushrooms, priests and religions and holy books have appeared.

An ancient story says that the old devil is sitting under a tree, having his morning tea, and a young disciple comes running, very much disturbed. He says, “What are you doing? You are sitting here, drinking tea, and our whole business is in difficulty. One man on the earth has found the truth!”

The old devil said, “There is no need to send our people. I have created the priests. And they are surrounding the man. Now they have become a wall between the man and the people. Whatever the man says, the priest will interprete it and distort it.

“Truth has been found many times,” said the old devil, “but while priests exist, truth will be found and lost again, because the priests immediately start interpreting, making organized religions around the truth — churches, temples, mosques — and the truth is lost in their interpretations, in their commentaries.
“What commentaries can they make? They don’t know the truth. Truth needs no commentary, it is pure experience. Either you know it or you don’t know it. there is no third position. That’s why I’m so much at ease. Just sit down and have a cup of tea.”

The story is significant. Beware of the priests, beware of organized religions, beware of others telling you what is truth. Nobody can tell it to you. You will have to find it yourself.
And it is so close to you that you have not to go on a faraway journey. You have to go in silence, in profound peace, beyond words and beyond feelings, and suddenly you find the temple of consciousness. And as you enter into it you disappear.
Only God is. That is your authentic reality. God is your very soul.