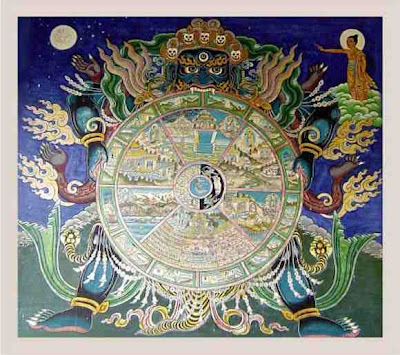 It is like the rotating wheel of seasons: you have seen many springs and again the spring comes. Again you hear the sound of the birds and it reminds you of other springs. You see flowers blooming and it reminds you of other blooming. And they were almost alike. I say ;almost;-- I don't say that it is an exact repetition; nothing is ever repetition exactly. But it is so approximately alike that it is very difficult to make a distinction--hence deja vu. You again see the clouds floating in the sky and the sun and the birds and the trees. The spring has come again with all its joy . . . and you have seen those springs many times!

So somewhere deep in your unconscious you are carrying all the memories of all the past lives. It is very possible that again and again you will come to situations which are alike and suddenly you feel as it has happened before. And it has happened before! May be the actors were different, but how can they be very much different? Human beings are human beings after all.

For example, just listening to me, you can be surrounded by a sense of deja vu -- you can start feeling you have listened to me before, the same way. I may not have been with you before but you may have listened to some other Master. And they have all the same look in the eyes, the same scent to their being, the same song to sing. Words differ but the rhythm, the constantly running underground rhythm is the same. So right now you can be caught in a deja vu.

Deja vu happens to everybody but how strong it can be depends--the strength depends on what type of barrier exists between this life and the past lives and other lives. If it is a China wall. very thick, it is very difficult for things to cross over. And even if they cross, they become distorted. The wall distorts them and by the time they reach you the moment is lost . . .