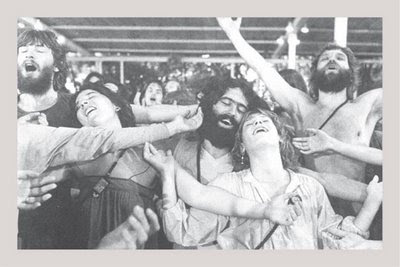 Every child is born ecstatic. Ecstasy is natural. It is not something that happens only to great sages. It is something that everybody brings with him into the world; everybody comes with it. It is life's innermost core. It is part of being alive. Life is ecstasy. Every child brings it into the world, but then the society jumps on the child, starts destroying the possibility of ecstasy, starts making the child miserable, starts conditioning the child.

The society is neurotic, and it cannot allow ecstatic people to be here. They are dangerous for it. Try to understand the mechanism; then things will be easier.

You cannot control an ecstatic man; it is impossible. You can only control a miserable man. An ecstatic man is bound to be free. Ecstasy is freedom. He cannot be reduced to being a slave. You cannot destroy him so easily; you cannot persuade him to live in a prison. He would like to dance under the stars and he would like to walk with the wind and he would like to talk with the sun and the moon. He will need the vast, the infinite, the huge, the enormous. He cannot be seduced into living in a dark cell. You cannot make a slave out of him. He will live his own life and he will do his thing. This is very difficult for the society. If there are many ecstatic people, the society will feel it is falling apart, its structure will not hold anymore.

Those ecstatic people will be the rebels. Remember, I don't call an ecstatic person "revolutionary"; I call him a "rebel." A revolutionary is one who wants to change the society, but he wants to replace it with another society. A rebel is one who wants to live as an individual and would like there to exist no rigid social structure in the world. A rebel is one who does not want to replace this society with another society -- because all the societies have proved the same The capitalist and the communist and the fascist and the socialist, they are all cousin-brothers; it doesn't make much difference. The society is society. All the churches have proved the same -- the Hindu, the Christian, the Mohammedan.

Source ~ "Ecstasy: The Forgotten Language" by Osho
Posted by Dhyan Gagan at 9:41 PM