Osho ~ Qualities of Seeker of Truth 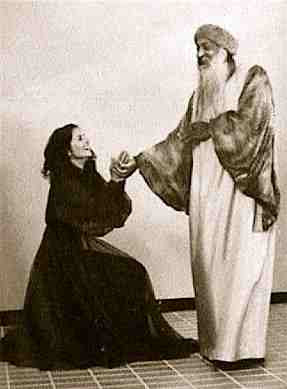 Question – Beloved Osho, What are the qualities of the Seeker of truth?

Osho – Every child is born with an innate search for truth. It is not something learned or adopted later on in life. Truth simply means, “I am, but I do not know who I am.” And the question is natural — “I must know the reality of my being.” It is not a curiosity.

These are the three differences, or three categories the world can be divided into: there are things which are, but they do not know that they are; hence there is no opening for any enquiry. They are closed, their existence is windowless. Then there are animals who know that they are, but they don’t have the intelligence to enquire what it is that they are. Their windows are open, but their intelligence is not enough to look out and see the stars and the sky and the birds and the trees. Their windows — whether opened or closed — don’t make much difference.

Perhaps once in a while a rare animal uses the window. In Shri Raman Maharshi’s ashram… and he was one of the most significant people of this century. He was not a master; that’s why people don’t know him as they know George Gurdjieff or J. Krishnamurti. They don’t know him even as they know Sri Aurobindo or P.D. Ouspensky who were only teachers — profound teachers, but not mystics.

Raman Maharshi was a silent pool of energy. Every morning he used to sit for a silent satsang, communion. He never talked much, unless asked something. Then too his answer was very short — having profundity, but you had to look for it. There was no explanation in it. His literature is confined to two, three small booklets.

His teaching was mostly to be in silent communion with the disciples. Naturally, very few people were benefited by him. But every morning he was sitting, people were sitting, and a cow would come and stand outside, putting her neck through the window, and she would remain standing there while the satsang lasted. It must have continued for years. People came and went, new people came, but the cow remained constant… and at the exact time, never late. And as the satsang would disperse she would move away.

One day she did not appear, and Shri Raman said, “Today satsang cannot be held, because my real audience is absent. I am afraid either the cow is very sick or she has died, and I have to go and look for her.” He lived on a mountain in the south of India, Arunachal. The cow belonged to a poor woodcutter who lived near the ashram. Raman left the temple where they used to meet, went to the woodcutter and asked, “What happened? The cow has not come today for satsang.”

Raman went in and there were tears in the eyes of the cow. And she died happily, putting her head in the lap of Raman Maharshi. This happened just in this century, and Raman declared her enlightened, and told his people that a beautiful memorial should be made for her.

It is very rare for human beings to be enlightened; it is almost impossibly rare for animals to become enlightened, but the cow attained. She will not be born again. From the body of a cow she has bypassed the whole world of humanity, and she has jumped ahead and joined with the buddhas. So once in a while — there are a few instances only — it has happened. But that cannot be called the rule; it is just the exception.

Man is, is aware that he is, and is capable by birth to enquire who he is. So it is not a question of learning, cultivation, education; you bring the quest with yourself. You are the quest. Your society destroys you. It has very sophisticated ways and means to destroy your quest, to remove the question from your being, or at least cover it up. And the method it uses is this: before the child has even asked who he is, the answer is given. And any answer that has been given before the question has been asked is futile; it is going to be just a burden.

He starts a journey of belief, and belief kills the quest. He becomes more and more knowledgeable. Then education is there, religious education is there, and there is no end to collecting knowledge. But all this knowledge is futile — not only futile, but poisonous, because the first step has gone wrong. The question was not asked, and the answer has been implanted in his mind, and since then he has been collecting more and more answers. He has completely forgotten that any answer that is not the finding of a question is meaningless.

So the only quality of a seeker of truth is that he does not believe, that he is not a believer, that he is ready to be ignorant rather than to be knowledgeable, because ignorance is at least natural, simple, innocent. And out of ignorance there is a possibility, almost a certainty, that the question will arise, that the journey will begin. But through knowledge you are lost in a jungle of words, theories, doctrines, dogmas. And there are so many, and they are so contradictory to each other, that soon you will find yourself more and more confused… more and more knowledgeable and more and more confused.

As far as I am concerned the basic quality of a seeker of truth is to cut himself away from all belief systems, from all borrowed knowledge — in other words, to have the courage to be ignorant rather than to have borrowed knowledge. Ignorance has a beauty; it is at least yours, authentic, sincere. It has come with you. It is your blood, it is your bones, it is your marrow.

Knowledgeability is ugly, absolute rubbish. It has been poured upon you by others, and you are carrying the load of it. And the load is such that it will not give you any opportunity to enquire on your own what truth is. Your collection of knowledge will answer immediately that this is truth. If you are filled with THE HOLY BIBLE, then the question will be answered by THE HOLY BIBLE. If you are filled with the VEDAS, then the question will come out of the VEDAS. But it will come from some source outside yourself; it will not be your discovery. And that which is not your discovery is not yours.

Truth brings freedom because it is your discovery. It makes you fully into man; otherwise you remain on the level of the animals: you are but you don’t know who you are. The search for truth is really the search for the reality of your being.

At the center we are one. At the periphery of existence we appear to be separate. And to know the truth of your being is to know the truth of the whole. There is just one quality, one courage: not to be afraid of being ignorant. On that point there can be no compromise, no cheap borrowed knowledge to decorate yourself with as a wise man. That’s enough! Just be pure and natural, and out of that purity, naturalness, ignorance, innocence, the quest is bound to be born.

Every human being would be a seeker of truth if the society were not interfering with children. The class of children is the most harmed, oppressed, exploited, distorted class of all classes — and the most helpless. And you are taking advantage of the helplessness of small children. But you are also not responsible. The same has been done to you. It is difficult to find out who was responsible in the beginning. But as long as we can look back, this has been the situation: every generation corrupts the new generation, and anybody who wants to prevent this corruption is condemned as corrupting the youth.

Socrates was condemned for corrupting the youth, and all that he was doing was the simple process of removing borrowed knowledge and helping his disciples to be themselves and then “to know thyself.” If anybody has served truth the most sincerely it was Socrates. But he was condemned by the court, by the law, by the people who were in power, for corruption, for corrupting young minds.

Strangely, in the land of Socrates I was also condemned as corrupting people’s minds. It seems the technology of corrupting the youth has evolved immensely in two thousand years, because it took Socrates his whole life to corrupt, and I was only there for two weeks! And the archbishop was already threatening to burn my house, to stone me to death.

Why are they afraid? They know perfectly well that they have no foundations. So if anybody shows the young people that their knowledge is unfounded, that all their answers are bogus because they don’t even have questions, that they are only repeating things parrot-like but they don’t have any understanding of what they are saying… then anybody who has a little intelligence will be able to understand it immediately. Is this corruption of the youth?

To bring people to the quest of the truth — is this corruption?
It seems it is the greatest crime in the world in which — unfortunately — we are living.

Source ~ “Beyond Psychology” by Osho
Posted by Dhyan Gagan at 8:25 PM