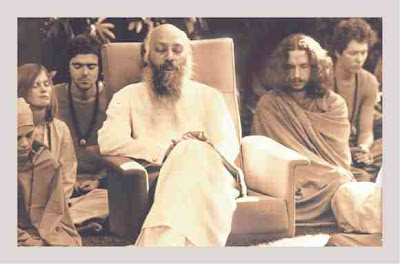 I am twenty-six years old. It is Sunday, 21st January, 1968 and today Osho will be speaking at 4:00pm in Sunmukhananda Hall in Bombay. One of my friends, knowing my quest for truth, advises me to go and listen to Him. I have already heard so many so-called saints and mahatmas that I am disillusioned by this religious game going on in India. But somehow, Osho, who is known as Acharya Rajneesh, attracts me. I decide to go to his discourse.

At 4:00pm I find my way to the second floor balcony of Sunmukhananda Hall, which is over-crowded. Lots of people are standing on the sides near the walls and there is quite and excitement in the air. It is very noisy. This is one of the biggest auditorium in Bombay, with the capacity to hold about five thousand people. I find a seat, make myself comfortable, and try to relax.

Within minutes a man with a beard, wearing a white lunghi and shawl appears on the podium, namastes the audience with folded hands and sits down in the lotus posture. I an sitting quit far away from the podium and can hardly see His face, but my heart is throbbing with excitement in anticipation of listening to this unknown man.

In a few moments I hear His sweet but strong voice addressing the audience as “Mere Priya Atman--my beloved souls.” Suddenly there is pindrop silence in the auditorium. I experience His voice taking me into a deep relaxation and I am listening to Him in utter silence. My mind has stopped: only His voice is echoing all the questions which have been bothering me for years.

The discourse is over, my heart is dancing with joy, and I tell my friend, “He is the Master I am looking for. I have found Him.” I come out and buy a few books and a magazine called Juoti Shikha. As I open it, I see that the headline on the page reads “Acharya Rajneesh’s 36th Birthday Celebration.” I can’t believe it--I am sure it is a printing mistake and it should be “63”. I ask the girl at the counter; she laughs and says that “36” is right. I still can’t believe that I have heard the discourse of a man who is only thirty-six years old. from His speech He sounds like an ancient rishi of the times of the Upanishads.