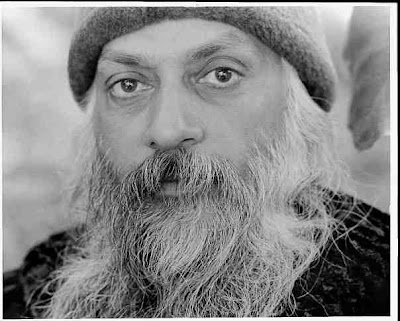 The teachings of Gautam Buddha have created two kinds of seekers: one is called Arhata and the other is called Bodhisattva.

The arhata is someone who makes every effort to become enlightened and once he is enlightened he completely forgets about those who are still groping in the dark. He has no concern with others. It is enough for him to become enlightened. In fact, according to the arhatas, even the great idea of compassion is nothing but again another kind of attachment -- and it has some significance to be understood.

Compassion is also a relationship; howsoever beautiful and great, it is also a concern with others. It is also a desire. Although it is a good desire it makes no difference. According to the arhatas, desire is a bondage whether it is good or bad. The chains can be made of gold or of steel, it doesn't matter; chains are chains. Compassion is a golden chain. The arhata insists that nobody can help anybody else at all. The very idea of helping others is based on wrong foundations. You can help only yourself.

It may occur to the ordinary mind that the Arhata is very selfish. But if you look without any prejudice, perhaps he also has something immensely important to declare to the world: Even helping the other is an interference in his life, in his lifestyle, in his destiny, in his future. Hence, arhatas don't believe in any compassion. Compassion to them is another beautiful desire to keep you tethered to the world of attachments. It is another name -- beautiful, but still just a name for a desiring mind.

Why should you be interested that somebody else becomes enlightened? It is none of your business. Everybody has absolute freedom to be himself. The Arhata insists on individuality and its absolute freedom. Even for the sake of good, nobody can be allowed to interfere in anybody else's life. Hence the moment he becomes enlightened, the Arhata does not accept disciples, he never preaches, he never helps in any way. He simply lives in his ecstasy. If somebody on his own can drink out of his well he will not prevent him, but he will not send an invitation to you.

If you come to him on your own accord and sit by his side and drink his presence, and get on the path, that is your business. If you go astray, he will not stop you. In a certain way this is the greatest respect ever paid to individual freedom -- to the very logical extreme. Even if you are falling into deep darkness, the arhata will silently wait. If his presence can help, it is okay, but he is not going to move his hands to help you, to give you a hand, to pull you out of a ditch. You are free to fall in a ditch and if you can fall in a ditch, you are absolutely capable of getting out of it.

The very idea of compassion is foreign to the philosophy of the Arhatas. Gautam Buddha accepted that there are a few people who will become Arhatas. And their path will be called Hinayana, "the small vehicle," the small boat in which only one person can go to the other shore. He does not bother to create a big ship and collect a crowd in a Noah's Ark and take them to the further shore. He simply goes himself in his small boat, which cannot even contain two. He is born alone in the world, he has lived and died millions of times alone in the world; alone he is going to the universal source.

Buddha accepts and respects the way of the Arhata -- but he also knows there are people who have immense compassion and when they become enlightened, their first longing is to share their joy, to share their truth. Compassion is their way. They also have some profound truth. These people are called bodhisattvas. They provoke and invite others to the same experience. And they wait on this shore as long as possible to help all seekers who are ready to move on the path, and who just need a guide; they need a helping hand.

The bodhisattva can postpone his going to the further shore out of compassion for blind people groping in darkness. Buddha had such a comprehensive and vast perception that he accepted both -- that this is simply the nature of a few people to be arhatas, and it is also simply the nature of a few other people to be bodhisattvas. And this is the standpoint of Gautam Buddha, that such is the case, nothing can be done about it -- an arhata will be an arhata and a bodhisattva will be a bodhisattva.

Their natures have different destinies, although they reach to the same goal finally. But after reaching the goal there is a parting of the ways. The arhatas don't stay on this shore even for a single moment. They are tired, they have been long enough in this wheel of Samsara, moving through birth and death millions of times. It has already been too much. They are bored and they don't want to stay even a single minute more. Their boat has arrived, and immediately they start moving towards the further shore. This is their suchness.

And there are bodhisattvas who can tell the boatman, "Wait, there is no hurry. I have lingered on this shore long enough -- in misery, in suffering, in anguish, in agony. Now all that has disappeared. I am in absolute bliss, silence and peace, and I don't see that there is anything more on the other shore. So as long as I can manage, I will be here to help people."

Gautam Buddha is certainly one of those people who can see the truth even in contradictions. He accepts both without making anybody feel lower or higher. But bodhisattvas call their path -- against the path of the arhatas -- Mahayana, "the great vehicle," the great ship. The other is just a small boat. Poor fellows, they simply go alone. And there has been a continuous conflict for twenty-five centuries after Gautam Buddha, between these two different approaches.