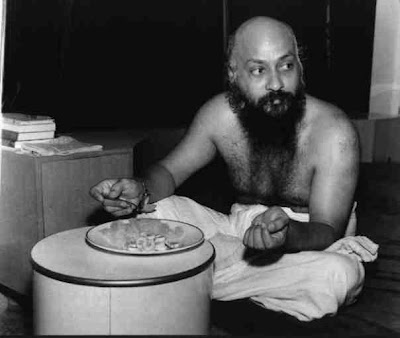 It is lunch time, and we are all sitting with Osho around a rectangular dining table. It seems that the friends who have arranged this camp are very poor--the quality of food they are serving is very poor. The dal is almost as liquid as water, and crushed rice (the left over little pieces that is sold at a cheaper rate after refining the rice) is cooked and I can see little black stones in it.

I am sitting next to Osho, who is very excited and has already started eating. I am surprised to see the expression on His face: He is eating with such delight, as if eating some delicious food. One old man is standing next to Him with a box of some cheap Indian sweet called laddoo. He places one laddoo on Osho’s plate, which Osho accepts with a pleasant smile. The man is pleased and places one more laddoo on His plate. Osho says nothing to Him, but silently takes the laddoo and places it on my plate.

Osho always enjoys telling jokes while eating. Eating with Him turns into a great feast--it doesn’t matter what you are eating. Today He tells this joke: One day Akbar slapped his court jester Birbal without any apparent reason, and Birbal just slapped the person standing next to him. The person got angry and asked Birbal why he had slapped him.

Birbal replied, “Don’t ask--just pass it to the next person.” so this game continued in the palace the whole day, and finally, at night in bed, Akbar’s wife slapped him.

Not to be serious is Osho’s main message which He not only preaches but practices every moment.
Posted by Dhyan Gagan at 9:20 PM