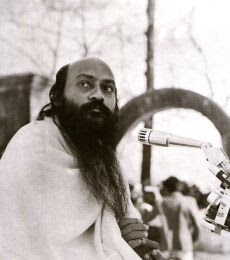 Since Buddha, many scientific developments have happened....
We don’t know what Buddha actually said although he never used anybody like Ouspensky or Plato or Vivekananda; he himself was his own interpreter. But there arose a problem when he died. He spoke for forty-two years – he became enlightened when he was about forty and then he lived to eighty-two. For forty-two years he was speaking morning, afternoon, evening. Now there were no scientific methods for recording what he was saying. When he died the first question was how to collect it all.

He had said so much – forty-two years is a long time, and many had become enlightened in those forty-two years. But those who became enlightened had become crystallized in the heart. because that is easier, simpler, and people tend to move to the simplest process, to the shortcut. Why bother? If you can reach a point directly, straight, then why go roundabout? And when Buddha was alive there was no need for anybody else to interpret him; he was his own spokesman, so the need was never felt.

There were thousands of arhats and bodhisattvas; they all gathered. Only those were called to the gathering who had become enlightened – obviously, because they would not misinterpret Buddha. And that’s true, they could not misinterpret him – it was impossible for them. They had also experienced the same universe of the beyond, they had also moved to the farther shore. But they all said, ”We have never bothered much about his words since we became enlightened. We have listened to him because his words were sweet.

The only man who had lived continuously with Buddha for forty-two years was Ananda; he was his Personal attendant, his caretaker. He had listened to him, almost every word that he had uttered was heard by Ananda. Even if he was talking to somebody privately, Ananda was present. Ananda was almost always present, like a shadow. He had heard everything – whatsoever had fallen from his lips. And he must have said many things to Ananda when there was nobody there. They must have talked just on going to bed in the night.

Ananda used to sleep in the same room just to take care of him – he may need something in the night. He may feel cold, he may feel hot, he may like the window to be opened or closed, or he may feel thirsty and may need some water or something, or – he was getting old – he may feel sick. So Ananda was there continuously. They all said, ”We should ask Ananda.” But then there was a very great problem: Ananda was not yet enlightened. He had heard everything that Buddha uttered publicly, uttered privately.

So Ananda said to Buddha, ”Before I take initiation.... Once I become your bhikkhu, your sannyasin, I will have to follow your orders, your commandments. Then whatsoever you say I will have to do.But before that I order you, as your elder brother, to grant me three things. Remember these three things.

First: I will always be with you. You cannot say to me, ’Ananda, go somewhere else, do
something else.’ You cannot send me to some other village to preach, to convert people, to give your message. This is my first order to you.

Second: I will be always present. Even if you are talking to somebody privately I want to hear everything. Whatsoever you are going to say in your life I want to be an audience to it. So you will not be able to tell me,’This is a private talk, you go out.’ I will not go, remember it!

And Buddha nodded his yes to all these three orders – he had to, he was younger than Ananda – and he followed those three things his whole life. The conference of the arhats and the bodhisattvas decided that only Ananda could relate Buddha’s words. And he had a beautiful memory; he had listened to everything very attentively. ”But the problem is he is not yet enlightened; we cannot rely upon him. His mind may play tricks, his mind may change things unconsciously. He may not do it deliberately, he may not do it consciously, but he still has a great unconscious in him. He may think he has heard that Buddha said this and he may never have said it.

He may delete a few words, he may add a few words. Who knows? And we don’t have any criterion because many things that he has heard only he has heard; there is no other witness.” And Ananda was sitting outside the hall. The doors were closed and he was weeping outside on the steps. He was weeping because he was not allowed inside. An eighty-four-year-old man weeping like a child! The man who had lived for forty-two years with Buddha was not allowed in! Now he was really in anguish.

Source: from Osho book "Walking In Zen, Sitting in Zen"
Posted by Dhyan Gagan at 5:15 PM